In August 2011, 48 years after the March on Washington, the African American poet Maya Angelou dedicated a poem to Martin Luther King, Jr to mark the unveiling in Washington D.C. of the new memorial to his legacy.

The opening lines of ‘Abundant Hope’ remembered King as a prophet, a saviour:

The great soul
Flew from the Creator
Bearing manna of hope
For his country
Starving severely from an absence of compassion.

Angelou was born on 4 April 1928, and today marks what would have been her 90th birthday. Between 1968 and her death in 2014, she shared her birthday with the anniversary of Martin Luther King’s assassination. The death of King devastated her. She had first met him in 1960 and had collaborated with him and the Southern Christian Leadership Conference on various civil rights projects. After his death, she refused to celebrate her birthday, and instead marked the anniversary by sending flowers to Coretta Scott King, with whom she remained close until King’s death in 2006.

Angelou’s devastation at King’s murder was felt across the United States. His assassination at the Lorraine motel on the evening of 4 April 1968 was followed by outrage from civil rights leaders, and riots in 110 cities across the country. In Washington D.C., the site of the massive march in 1963, over 20,000 people took to the streets in anger and frustration, looting and burning large parts of the inner city. Stokeley Carmichael, the former president of the Student Non-violent Coordinating Committee who later espoused black power militancy, warned reporters: “When White America killed Dr. King, it declared war on us. We have to retaliate for the execution of Dr. King.”

King had arrived in Memphis, Tennessee on 3 April, and had delivered a searing speech at the Mason Temple in the Washington Heights district of the city. He was in Memphis to support striking sanitation workers, who had been protesting poor conditions and wages for almost two months. This was indicative of King’s radical turn: exactly a year before his death he had made a controversial public statement against the war in Vietnam, and by 1968 he was preoccupied by the economic disadvantage that African Americans continued to face despite the Civil Rights legislation passed in 1964 and 1965. He had spent two years pressurizing the government of Lyndon B. Johnson to pass a fair housing bill. To the eyes of conservatives and racists, all of this seemed to confirm that King was a communist.

Indeed, in the years prior to his assassination, King was deeply unpopular. In 1966, Gallup measured his popularity amongst the American public: 32% positive versus 63% negative. In the midst of the Selma controversy in March 1965, King appeared on the cover of Time magazine: the depiction was of an angry black man, in stark contrast to the statesmanlike portrayal a year before when Time named him Man of the Year.

Years later, during the debates about whether to institute a federal holiday in honour of King, Senator Jesse Helms (R.-N.C.) attempted to block the passage of the bill by accusing King of “action-oriented marxism”, of espousing the “official policy of communism.” And there was a kernel of truth to Helms’ accusations: King was a radical. He was attempting to upend the systemic inequality within American society. The danger of remembering King as a prophet, a saviour, is that we risk de-radicalizing his memory. This is made all the easier by a national holiday that remembers King’s contribution as ‘service.’ The most recent misuse of the memory of King was during the Superbowl interval in February, when Ram used King’s voice in their advert to sell trucks. “In the spirit of Dr. Martin Luther King, Jr.,” the ad people tell us, “Ram truck owners also believe in a life of serving others. They serve because they’re driven by a higher calling. They serve because they feel a shared responsibility and commitment to their family and community.” Conservatives like Helms have got their way: the memory of King is not of the radical preacher who sought to undermine the “giant triplets of racism, extreme materialism, and militarism.” Instead, his memory is preserved in the aspic of 1963, when he had a dream.

The monument to King’s memory in Washington D.C. does very little to counter that saccharine version of his legacy. In Lei Yixin’s design, a great white King looms up over the Tidal Basin, overlooking a series of decontextualized quotes that emphasize humanity, justice, peace, loyalty and love. This forms a comfortable narrative that allows King to be accepted as an establishment figure, completely consistent with the mythology that America is like the arc of the moral universe, and will bend inevitably towards justice. This is the version of King that allowed Bill O’Reilly to claim in 2016 (with goodness knows what authority) that King would not have marched with the Black Lives Matters protesters. It is a simplistic version of a complex man, who spent his final days criticizing the government for their war in Vietnam, campaigning for fair housing provision and for labour rights for sanitation workers. King understood that change would not be given easily: it had to be forced.

In his address to the SCLC convention in August 1967, King tried to answer the question, “where do we go from here?” His answer questioned the very foundations of the American project:

“‘Where do we go from here?’ that we must honestly face the fact that the movement must address itself to the question of restructuring the whole of American society. There are forty million poor people here, and one day we must ask the question, ‘Why are there forty million poor people in America?’ And when you begin to ask that question, you are raising a question about the economic system, about a broader distribution of wealth. When you ask that question, you begin to question the capitalistic economy. And I’m simply saying that more and more, we’ve got to begin to ask questions about the whole society.”

Maya Angelou’s recollection of King in her 2011 poem is a rose-tinted one. She deliberately forgets the animosity shown towards King when she writes:

In his remarks at the delayed dedication of the King memorial in October 2011, Barack Obama got much closer to describing a more real King:

“We forget now, but during his life, Dr. King wasn’t always considered a unifying figure. Even after rising to prominence, even after winning the Nobel Peace Prize, Dr. King was vilified by many, denounced as a rabble rouser and an agitator, a communist and a radical. He was even attacked by his own people, by those who felt he was going too fast or those who felt he was going too slow; by those who felt he shouldn’t meddle in issues like the Vietnam War or the rights of union workers. We know from his own testimony the doubts and the pain this caused him, and that the controversy that would swirl around his actions would last until the fateful day he died.” 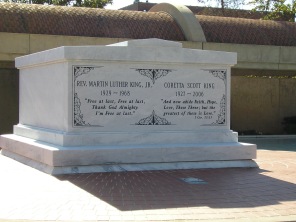 He continued: “Change has never been simple, or without controversy. Change depends on persistence. Change requires determination.”

So, today we remember Maya Angelou, rising with an abundance of hope, and Martin Luther King, Jr, whose vision of change for African Americans still has a way to go.