On Monday evening I spent a lovely evening in the company of an old friend at the University of Lincoln, who had invited me to participate in a Historical Association roundtable on the 2016 US election. He originally asked me to offer perspectives on race and gender, but in the end I only talked about gender. There’s a lot to say about gender and the US election. In fact, although a lot was said about women and gender in the course of the campaigning, the reality is that for an election featuring the first female major-party presidential candidate, the election cycle didn’t have much impact on the number of women in national politics. So why did this conversation about women and politics, and more broadly women in the US, not translate into real change in the political landscape?

Across US political life, women make up about 20-25% of the overall representation in elected offices. At federal level, this is a little lower: after the 2016 election just under 20% of the House of Representatives, and 21% of the Senate are women. For all the horse-trading, total numbers of women in the House dropped from 84 to 83 in the new Congress. Organizations like Emily’s List have been pushing for more gender diverse selection in the Democratic primaries. In the aftermath of the election, their workshops and training sessions experienced unprecedented attendance by women who were prepared to run in the next cycle.

This is significant because we often think of the Senate as the cradle of the presidency. The chamber has variously been described as “the mother of Presidents,” “the Presidential incubator,” and “the Presidential nursery.” This language of mothering stands in stark contrast to the historically male nature of the Senate. In historical terms, though, very few Senators have ever transitioned directly from the chamber to the White House: the only three are Warren G. Harding (1920), John F. Kennedy (1960) and Barack Obama (2008). Many Senators have come to the Presidency via a more indirect route, for example via the Vice Presidency. Hillary Clinton’s stint as Secretary of State should, therefore, have made her a much stronger candidate than she was in 2008. It did, but in the end it was not enough to push her over the line.

Looking at the coverage of Clinton’s loss in the aftermath of November, the general consensus is that she lost because of the interplay of four factors: she was perceived as untrustworthy, perceived as too ambitious, seen as part of an oligarchy/dynasty, and – perhaps most importantly – perceived to be “unlikeable.” Her campaign lacked the ideological buzz generated by Obama and Sanders, but she was fighting a campaign on several fronts: her ability to use her extensive track record was hampered by her need to also run against her own past. And as the Atlantic put it before the election, she was also fighting the fear of a female president. 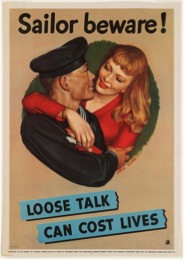 ichael Flynn) and Trump’s use of the “Crooked Hillary” label that stuck. Of course, the idea that women are inherently untrustworthy is not at all new. It was most clearly expressed in popular culture during the Second World War, as the War Department and other government agencies produced propaganda to warn against sharing military information with women who might gossip and inadvertently pass it on to the enemy. The received wisdom is that women are gossips, and so they are untrustworthy and dangerous. This was particularly accentuated in an era when women were pushing against traditional gender boundaries, also a feature of Clinton’s campaign.

The focus on Clinton’s e-mails, and use of an unsecured e-mail server, confirmed this 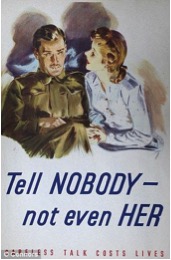 sense that women were untrustworthy. The “gossipy” nature of many of the leaked/released e-mails further indicated that Clinton’s self-presentation as a qualified, hard-nosed politician simply masked her gossipy, vain womanliness.

The perception that she was untrustworthy was also a legacy of her husband’s sex scandals. In a 2008 article in the Yale Law Journal, Julia Simon-Kerr explores the ways that the legal system has generally hinged women’s credibility or honour on her moral integrity and sexual virtue. Simon-Kerr concludes that “while our cultural definition of sexual virtue has shifted drastically since the 18th century, and even since the initial enactment of the rape statutes [in the 1970s], the idea that a woman’s sexual virtue bears upon her credibility is still present today.” For one group of American voters, Clinton’s sexual virtue was compromised by her decision to support her husband through scandal, and her excoriation of her husband’s accusers (especially Lewinsky); for another group, her virtue was undermined by her inability to be sufficiently ‘woman’ in order to keep her husband from straying.

It is not a coincidence, then, that the “lying Hillary” myth emerged at the same time as the sex-scandals of the mid 1990s. Her own morality, and so her credibility, was undermined by her husband’s immorality. When William Safire’s “Blizzard of Lies” column appeared in the New York Times in January 1996, he cast Hillary as an over-ambitious woman who was pushing a suspect political agenda alongside her husband’s infidelities. Often identified as the root of the idea that Hillary is a congenital liar, the Safire column cannot be divorced from a narrative of morality/credibility.

In 2016 this took on a surreal significance, given the obvious capacity for pathological lying displayed by her Republican opponent, and fact checking of Hillary’s statements that showed she was really quite honest, for a politician. But where Trump’s lying provoked disbelief, and often cartoonish or comic effect, for Clinton the e-mail scandal simply confirmed a 20-year old mythology. False equivalence was attached to her e-mails (disclosed by the FBI), for example, and early evidence of his ties to Russia (which the FBI chose not to disclose in advance of the election).

This false equivalence is part of a wider phenomenon that holds women in politics to a different set of standards. The Barbara Lee Family Foundation’s “Keys to Elected Office: Essential Guide for Women” indicates that women still have to be more qualified than male counterparts, but must also establish themselves within a language of family. Every time Clinton began a sentence with “as a grandmother,” she was playing by the rules. 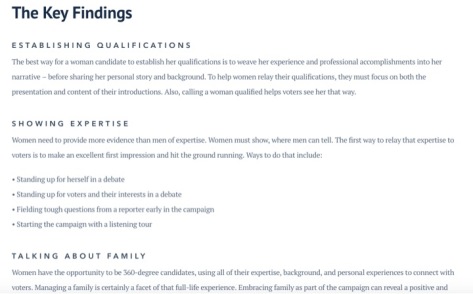 The results of Pew research analyzing the likely behaviour of voters (pre-election) and attitudes (through exit polls) reveals major differences in the ways that men and women saw the historical significance of the election, and in the “likeability” factor. The research also indicates that Clinton did not get the expected “woman bounce.” Women supported Clinton over Trump by 54% to 42%. But this is approximately the same as the Democratic advantage among women in 2012 (55% Obama vs. 44% Romney) and 2008 (56% Obama vs. 43% McCain).

There is not, and never has been, such a thing as a woman’s voting block. Delays in extending the suffrage to women can be partly explained by this fear that women would all vote in the same way. For example, the dominance of women in the Temperance movement suggested to the alcohol industry that a vote for women would be a vote for prohibition. Once the Eighteenth Amendment was ratified in 1919, alcohol interests no longer funnelled money into blocking the women’s vote. The fear of a monolithic vote amongst women was never realized. Gender was not the defining factor explaining women’s vote for Clinton, although it may have been a significant factor in why men did not vote for her.

One thought on “The ‘woman issue’ in the last US election”